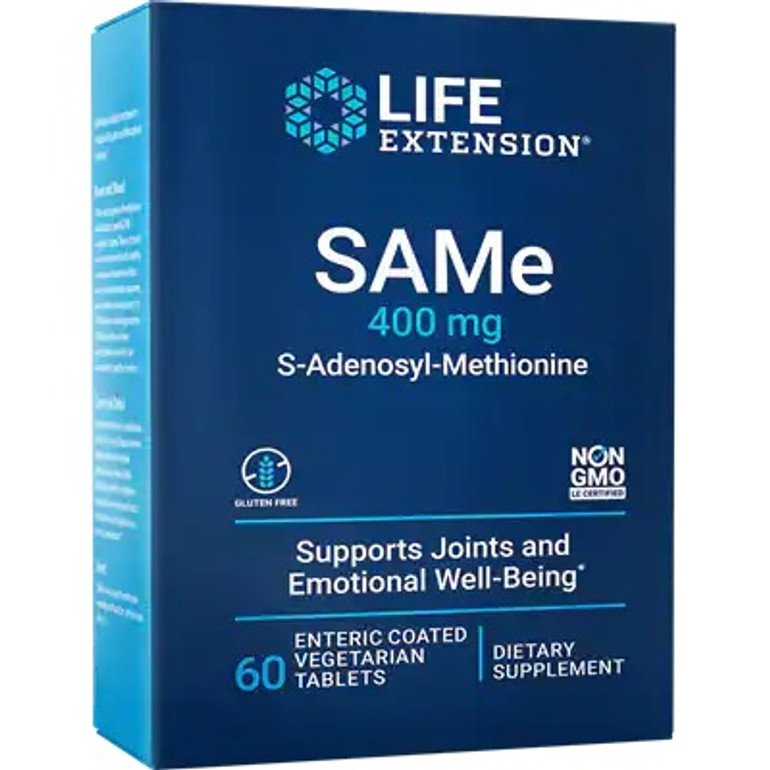 SAMe helps maintain stable mood and joint function without side effects. In addition, SAMe has multiple mechanisms of action that are used throughout the body, especially in the liver, which help maintain liver health. Largely known for its effects on optimal mood, SAMe has also shown benefits for the liver, brain, and joints.

Benefits at a glance:

SAMe is an amino acid derivative normally synthesized in the body that may become depleted with sickness or age. Supplementing with SAMe plus folate, trimethylglycine (TMG or betaine), vitamins B6 and B12 appears to be an effective way to overcome this deficiency.

SAMe is concentrated in the liver and brain and is a major methyl donor in the synthesis of hormones, nucleic acids, proteins, and phospholipids, and catecholamines and other neurotransmitters. SAMe is required for the synthesis of norepinephrine, dopamine, and serotonin.1-3 SAMe facilitates glutathione4,5 usage, which improves the body's antioxidant defense. It also helps maintain acetylcholine levels6,7 which are necessary for cognitive function.

SAMe is used by the body in three important pathways:

In 2002, an agency of the U.S. Department of Health and Human Services conducted a meticulous evaluation of SAMe. Its findings show the efficacy of SAMe in helping to maintain stable mood and joint function without any side effects.16 Since aging people often suffer joint discomfort and immobilization17,18, SAMe addresses multiple problems people face as they grow older.7,10,19-21

SAMe has multimodal mechanisms of action that are used throughout the body and especially in the liver.21-24 In order to perform its detoxification role, the liver continually performs large numbers of complex enzymatic reactions.25 SAMe facilitates healthy methylation enzymatic processes and boosts hepatic levels of glutathione, a critical antioxidant.24,26,27When liver function is compromised, glutathione is depleted, which leads to free radical damage. In addition, SAMe acts as a methyl donor in the synthesis and formation of phosphatidylcholine and L-cysteine, both necessary for maintaining liver health.9,28

A recent study conducted at Harvard Medical School and Massachusetts General Hospital cited the benefits of SAMe for mood elevation.29 In addition, a report published in Germany indicates that SAMe may help maintain healthy neurological function. The report revealed that:

SAMe's ability to boost brain cell methylation facilitates youthful DNA enzymatic actions which may help account for SAMe’s mood-elevating properties. These enzymatic reactions are required for the healthy conversion of neurotransmitters such as serotonin and dopamine.

Caution: SAMe should not be taken by those diagnosed with bipolar disorder.

This product hasn't received any reviews yet. Be the first to review this product!
Shipping Information
Custom Tab
Additional Information