Prestigious scientific journals have highlighted gamma tocopherol as one of the most critically important forms of vitamin E for those seeking optimal health benefits. In fact, studies show the combination of alpha- and gamma-tocopherol supplementation appears to be superior to either supplementation alone on biomarkers of oxidative stress and on inflammatory factors.135,136

Most commercial vitamin E supplements contain little, if any, gamma tocopherol. They instead rely on alpha tocopherolas the primary ingredient. However, it is gamma tocopherol (not the alpha form) that quenches peroxynitrite, the free radical that plays a major role in the development of age-related decline.137

Life Extension has uncovered research suggesting that adding sesame lignans to gamma tocopherol may significantly enhance its beneficial effects.138-140 Sesame and its lignans have been shown to boost antioxidative activity in the tissues by elevating the levels of two antioxidative vitamins, vitamin C and E.141

Take one (1) softgel once or twice daily with food, or as recommended by a healthcare practitioner. 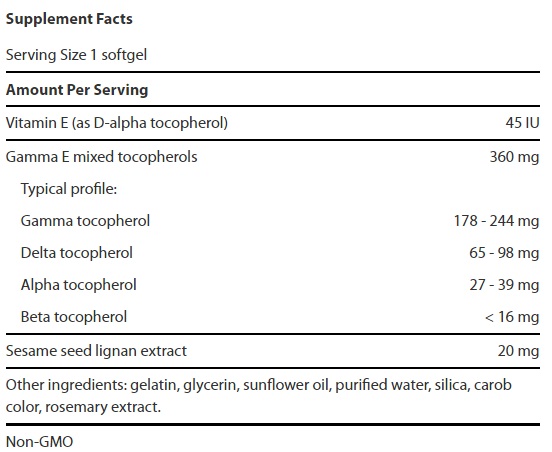